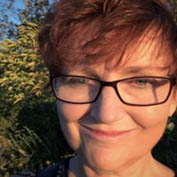 This is my second journey of faith.

Yes, you heard that correctly. About ten years ago, before we had regular “Journeys of Faith,” I was asked to speak on a Sunday morning about my background and why I come to this church. My talk then was titled “A Sense Of Belonging” and I spoke about being German, an immigrant, and an atheist.

Like many of us, I started by defining myself by what I am not: I am not a traditional Christian believer. My parents were culturally Lutheran, but not church goers. Nevertheless, I grew up steeped in good Protestant work ethic and a sense that all pleasures have to be earned before they can be enjoyed! Although I at times question it, this has actually served me rather well.

Over 25 years of participation in this church and hearing many wise and open-minded sermons that did not require me to subscribe to a specific image of God, I have come to understand that maybe I am not an atheist but just have a very broad definition of God. Can the force behind the beautiful evolving universe be called “God”? I think it can, and it is enough for me.

I title this journey of faith “The Longer View,” and expect that some of you will laugh and still think me a newcomer. Clearly, my initial goal to find a place of belonging has been reached, or has it? I know many of you, a few closely. I have made friends. My children grew up in Young Church. I have sung in the choir since the day I came, have run meetings and groups and participated in church government. My name is even chiseled in slate on a plaque in the vestibule together with the names of other honored church members.

With my longer perspective, I now understand that church is much like a family. Families evolve. Children grow up, new ones are born, or adopted. There are weird aunties and odd cousins. We have matriarchs and patriarchs. Misunderstandings and arguments happen. People die and leave large holes in the fabric of the community. In my interior view, I can still see faces of people in the pews who are no longer here with us. One day mine will be one of them, too. Ministers and staff members leave, new ones are hired. Change is constant.

The church I thought I joined in 1993 existed only as a brief snapshot in time which I naively expected to be permanent. It was and is not, of course. There are only interim times, ever.

Here I have grown into roles I never thought I even wanted, or believed I would be able to fulfill. I have grown bolder by saying ‘yes’ to responsibilities more often. It is a joy to be fully present and involved as opposed to safely hiding in the shadows of my insecurities. I have been supported, and have been forgiven for making mistakes. My continued sense of belonging is not a given, even after this many years, but depends on my ongoing participation.

In this current snapshot in time, I have been absent a bit more, largely due to the isolating effects of my hearing loss and grieving the loss of my mother, the last stable link to my German past. Not being able to hear makes interactions with people and in groups challenging, never mind singing in the choir. I currently struggle with this loss. However, I also have to admit how enticingly easy it is to feel calm and enlightened when I am alone and interaction with others is limited! Then I show up here…

Ram Dass says: “Whenever you think you are enlightened, go spend a week with your family.” FRS is my family in that sense, and you keep me honest and challenged. This fleeting period of time that is mine and ours, matters. Let’s make the most of it by leaving even a small mark on the world.

If I am very lucky, I may even be invited to give Journey of Faith number three one day!