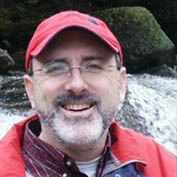 It was nearly 20 years ago, at South Church UU in Portsmouth, and I was sitting in a group led by our minister, Rev. Marta Flanagan. She proposed an exercise. It seemed simple enough. She said, ‘Draw a picture of the God of your youth.’

I suddenly realized I was having a closet moment. I know the closet well…but this was not the gay closet. And that’s the irony. I had come to the UU church seeking refuge from the gay closet. There I found arms so welcoming that it wasn’t just people trying to be welcoming…who I loved was simply a non-issue. Gay wedding? No big deal. Same-sex couple child welcoming? Of course. Here was a church and a faith that had moved beyond welcoming and was just there. Arms open.

But now I was being asked to draw a picture of the god of my youth, and suddenly feeling surprised at the walls closing around me. A familiar fear began to rise, one that I learned early in my Catholic upbringing: A fear that says, you only belong if you meet certain conditions. A fear that causes a de-personalizing override of who you are and what you feel in service of fitting in, fear of being kicked out of the tribe.

I knew what the real god of my youth looked like, and it was a powerful god. But this was not a deity. It was a car. I first attended the sport of drag racing at the impressionable age of twelve. And you know what? I felt I belonged for the first time. I can’t explain why but there I was and there were drag racing’s arms, wide open, and I was hooked. I worshipped there every Sunday, prayed for good racing weather, and made it my life. I was a crew man until old enough to race, I raced until I was old enough to know I couldn’t afford it, and I worked several careers around the sport until gradually its hold on me weakened to an occasional calling.

A confession: drag racing is an ecological and spiritual disaster. In the quest to go really fast in a short amount of time there is no amount of fuel and rubber and aluminum and peace and quiet that won’t be sacrificed. And that was the bind. I had worshipped drag racing and I was sitting in a church where in the parking lot there were more Priuses than a Toyota dealership. It sounds ridiculous to say, but I was terrified.

I was terrified, and I picked up my crayon, and I drew the god of my youth.

The dragster I drew had smoke billowing up from the tires and flames belching from the exhaust. It looked loud and annoying just sitting on the page. So imagine my surprise when the group came at me not with judgments but with interest, care, curiosity. In that moment, I learned something about belonging…that it’s possible to create a community where belonging comes first, and what you worship and who you love only matter as part of your journey. Arms open.

The Dalai Lama says his religion is kindness. What I’ve come to realize is that the real god of my youth was not a car. It was kindness and acceptance and welcoming arms. That’s what I’ve found at Unitarian Universalism and at FRS. After several years of membership, last year I joined a chalice circle. Sitting with other members, listening–truly listening–and being heard, I felt what has become the god of my adulthood: the power of oneness, the interconnection of all things, something that can’t be drawn with a crayon.