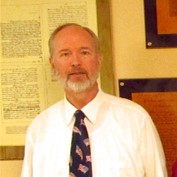 Shawn Flaherty shared his Journey of Faith on April 15, 2018.I grew up in Burlington, Massachusetts. When my mother, a Methodist, married my father, who was Catholic, she promised to raise their children in the Catholic church. Neither of my parents were regular attendees of any church but they did fulfill that promise.

I was an altar boy for a year and at times dreamt of becoming a priest. But as I grew a bit older, I decided to quit being an altar boy and slowly started to skip attending weekly Mass. Learning so much in high school and college about history as well arts and sciences, I began to question my belief in God. I decided that I was an atheist despite my continued interest in religious history and comparative religions. I remember declaring to friends and family that religion was, as Karl Marx said, the “opium of the masses.”

My radicalism was tamed during my last two years in college when I fell in love with a woman who could debate philosophy and history with me but maintained a rock-solid belief in God. We were married after graduation in the Catholic church. Soon after, we had a daughter whom we brought up Catholic.

During this first quarter century of my life, I remained a Catholic. My wife’s faith grew over the years while mine was waning, and we eventually divorced. My ex-wife is now a Congregational minister and will be officiating at our daughter’s wedding next month.

I grew to realize that I was not an atheist. To me, both theists and atheists seemed to know whether there is a God. I became an agnostic but an agnostic who remained deeply interested in religions.

Mother Teresa is one of my heroes. She privately questioned God’s existence many times over her long life. I think of Mother Theresa often as I continue to reflect on the meaning of life and my small place in the history of the world.

I have worked with children for over 40 years, first as an intern at a community mental health center. I then built a counseling practice, but it became clear that my real passion was working with children, and I eventually became a special needs and alternative education teacher. Twelve years ago I began teaching ancient history.

Much like Mother Teresa and the people of the ancient world, I continue to look for my personal meaning in life. A few years ago, I was working with a student who said, in a respectful manner, “Mr. Flaherty, you are now at the beginning of the end of your life.” I laughed out loud at her comment, but looking back, I see the impact it has had on my life. It was soon after that comment that I first walked through the doors of the First Religious Society.

Though I have lived in Newburyport for three decades, I had only been into this beautiful church for a wedding, memorial services, and a bat mitzvah. Before I was afflicted with neuropathy, I used to walk all around our city almost daily, and always made sure to walk by the FRS to marvel at its architecture and to read the message board out front.

I decided to check out Sunday services in October 2016. I was not fully aware of Unitarian Universalism and actually saw it as a Protestant sect of Christianity.

I have been more than pleasantly surprised with what I have found here at FRS–a loving congregation of people with all sorts of beliefs and on various paths of faith. I am proud to tell friends that I belong to FRS.

Since joining FRS, I have been a member of three Chalice Circle groups. I believe that it was our deep conversations about life and the relationships I formed that helped me understand that I have made a home here.

My wife and I have recently decided to relocate to warmer climes due to my health issues. New England winters do not agree with me anymore. We will not be moving until summer 2019. I have more than a year to enjoy my friends here. I will always hold the FRS in my heart and will seek out a new UU church in the Tampa, Florida area. In the meantime, I look forward to sharing a truly amazing year with you here at the First Religious Society of Newburyport.