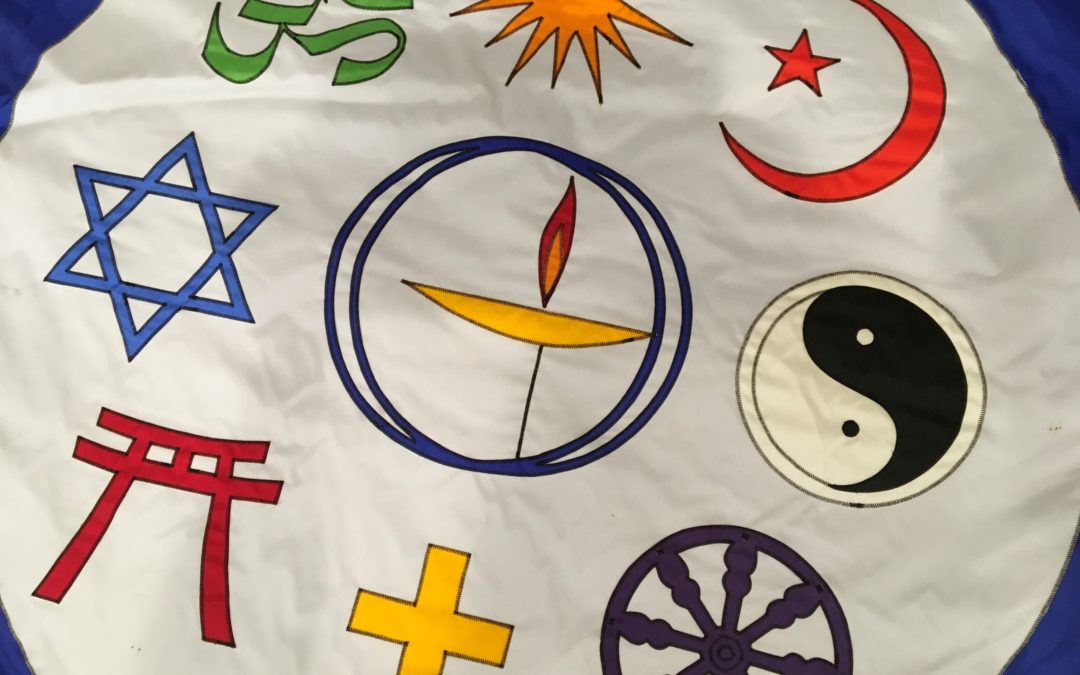 I am one of those rare birds, born and raised Unitarian Universalist. I have lived by the 7 UU Principles and Purposes, even before they were adopted in 1984. Looking back at my youth, it is pretty apparent that coming of age in Bedford, Massachusetts, and in the Unitarian Universalist environment of First Parish UU, during the ‘60s and ‘70s had a major impact on my spiritual growth. As did, of course, my parents. Bedford and the First Parish were hot beds of exploration and discovery.

In Bedford, the school system promoted the arts and learning. The teachers were not afraid to experiment. We had a course called Humanities, which was taught by an English, art and music teacher, all attending class every day. Imagine rationalizing that in these times! In music class in Junior High we studied musicals like Tommy and Jesus Christ Superstar (I’m dating myself a little here.) Whatever we were interested in we were free to explore.

Several years back I met up with one of my art teachers, and discussed how teaching has changed over the years. He said when I was in school was the best because he could experiment with whatever he wanted, and cater to the class’s unique character. That says volumes about that time in history.

The church I grew up in was just as experimental. It was a very humanist congregation; they didn’t use the word “god.” I was in the pilot class of About Your Sexuality, the precursor to OWL, taught by our minister. Our LRY, Liberal Religious Youth group, was extremely active. We were seriously involved in the anti-war, civil rights and counterculture activities, and the church elders blessed it all! After every service there was a discussion hour about the service, a practice that still continues. With my mother still active at the First Parish in Bedford, I remain very connected to that church, which has attracted some powerful ministers over the years: Dave Weisbard, Bill Shultz, Jack Mendelson and currently John Gibbons. (A little UU name-dropping.)

By their example, my parents were a big influence in my spiritual journey. They were extremely involved in the church; between the two of them they probably served on every committee at least once. They were very active politically, going to Washington, DC on peace marches and doing whatever they could to help progressive politics. They also worked on the local front as well for affordable housing and helped run a food co-op.

Our family spent a lot of time in the wilderness. We spent our summers camping at Ferry Beach, a wonderful UU conference center in Maine. One of the biggest influences on my sense of exploration was my mum’s love of nature. Wherever we went, she pointed out and named plants, trees, and animals. This activity made me very aware of my environment. I was always looking and this looking fostered my ability to be present.

Ferry Beach became and has remained my go-to retreat and battery recharging station. When I became a parent myself, I brought my kids there for summer and teen conferences and coordinated the First Unitarian Universalist Society in Newton’s Ferry Beach retreats for 14 years, sharing my love of nature and the beach.

The 7th Principle—“respect for the interdependent web of all existence of which we are a part”—has driven how my wife and I live, and is what brought us to our home on Plum Island. And from there it was my being a life-long UU that ultimately brought us to this congregation, where we hope to continue our spiritual journey. These are really exciting times to be involved at the First Religious Society. I look forward to participating in the congregation’s exploration and discovery.