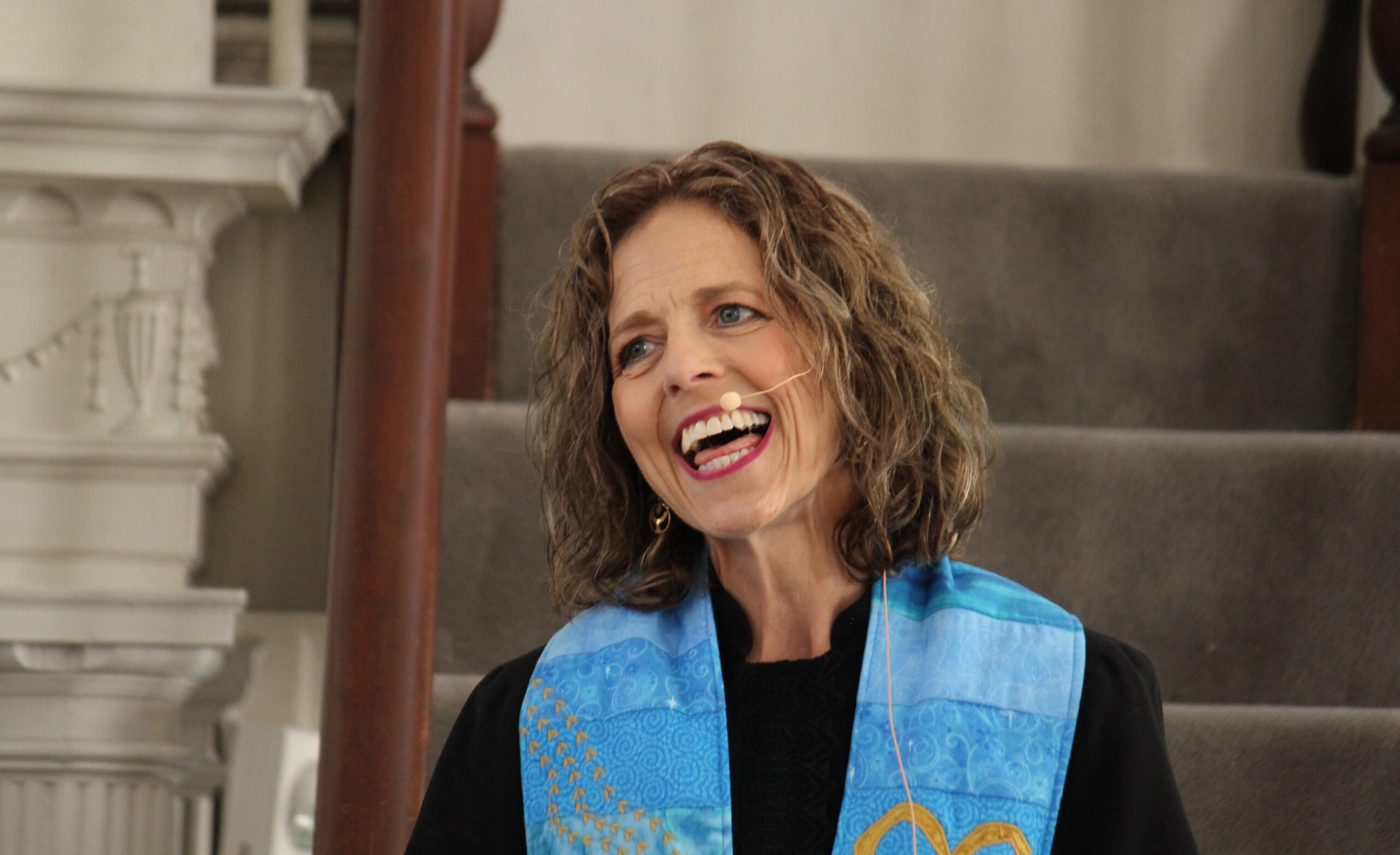 The Reverend Rebecca M. Bryan joyfully accepted the call to serve as the settled minister at the First Religious Society starting in August 2018. She is the congregation’s first settled female minister.

Rev. Rebecca serves as a member of the Diversity Equity Inclusion Task Force for the City of Newburyport, Chair of the Greater Newburyport Clergy Association, and as the UUA Director on the Massachusetts Convention of Congregational Ministers.

Rev. Rebecca has been a Unitarian Universalist for forty years. She is committed to sharing the good news of UUism through congregational life, preaching, and denominational engagement. Some of her additional areas of focus include interfaith partnerships, addictions ministry, and spiritual direction. Rev. Rebecca aspires to live her life and fulfill her ministry guided by Love and the seven principles of Unitarian Universalism.

Rev. Rebecca is a 2015 graduate of Andover Newton Theological School where she was

She was ordained into the fellowship of Unitarian Universalist ministers after a long and rewarding career in the nonprofit sector. She worked in the field of fundraising and organizational development for over twenty-five years including operating her own consulting business helping nonprofits with capital campaigns, annual and planned giving, and organizational development.

Before coming to the First Religious Society, Rev. Rebecca served as the Interim Senior Minister for First Parish in Brookline, MA and contract minister for the Unitarian Universalist Parish in Monson, MA. 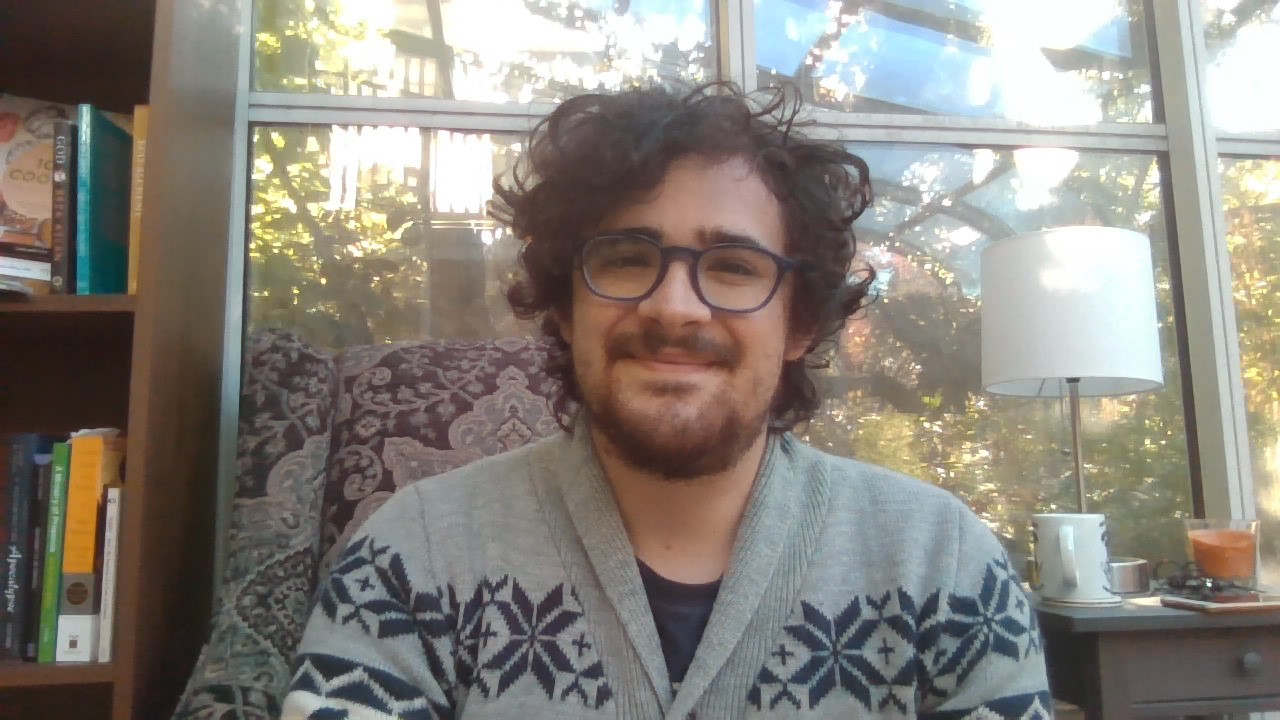 David Livingstone joined FRS as the Ministerial Intern in October 2021 as part of his spiritual and educational journey to ordination in Unitarian Universalism. David is a current student at Harvard Divinity School where he is studying preaching, pastoral care, and ethical methods of studying myriad wisdom and faith traditions. David has been a Unitarian Universalist for the past 12 years, having had his first experience with UU in Boston as a teenager. In his previous career, David was a licensed officer with the Merchant Marine and worked as a mate and educator on a variety of tall ships (traditional sailing vessels). At FRS David helps support the staff in planning and delivering services and organizing small group meetings. He is here to learn and grow with the congregation. 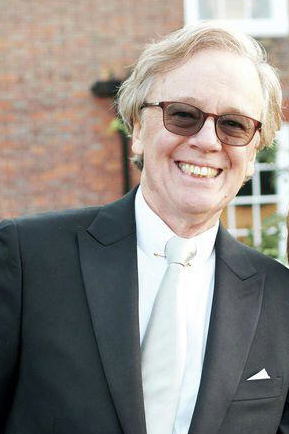 Rob Authier joined the staff of First Religious Society as Director of Church Operations in November 2021. He provides strategic leadership and staff support to the Minister, Parish Board, and church committees to integrate and execute church Mission and Vision in the daily business affairs of the church.

For most of his career, Rob was CEO of the 25,000-member Massachusetts Association of REALTORS®, having previously led the New Hampshire and Virginia associations. Mentoring more than 15 of his staff to become CEOs themselves, Rob received his national organization’s highest staff Award of Excellence in 2008. He also was Public Relations Director of the American Lung Association of Massachusetts. More recently, he has provided strategic planning, leadership, and crisis management consulting.

a substitute teacher/instructional assistant in the Triton Regional School District. She was a parent volunteer with the Triton Music Parents Organization, serving as treasurer for three years, and as a member of the parent “pit crew” for the marching band. Diane enjoys singing and has sung with the FRS Adult Choir and the Candlelight Chorale, as well as the Newburyport Choral Society.

Diane Carroll joined the staff at First Religious Society in January 2019 as the Office Administrator. Her role at FRS includes desktop publishing, bookkeeping, publicity, editing, scheduling room reservations and rentals, and managing the front office. Diane holds a Bachelor of Music Business degree from the University of Massachusetts Lowell. She worked for Mercer Management Consulting for 15 years, first as a billing representative and then as a knowledge manager/document librarian for the transportation industry group. After stepping away from the work force to raise her son during his early years,

Diane worked as a substitute teacher/instructional assistant in the Triton Regional School District. She was a parent volunteer with the Triton Music Parents Organization, serving as treasurer for three years, and with the parent “pit crew” for the Triton High School marching band. Diane enjoys singing and has sung with the FRS Adult Choir, the Candlelight Chorale, and the Newburyport Choral Society. 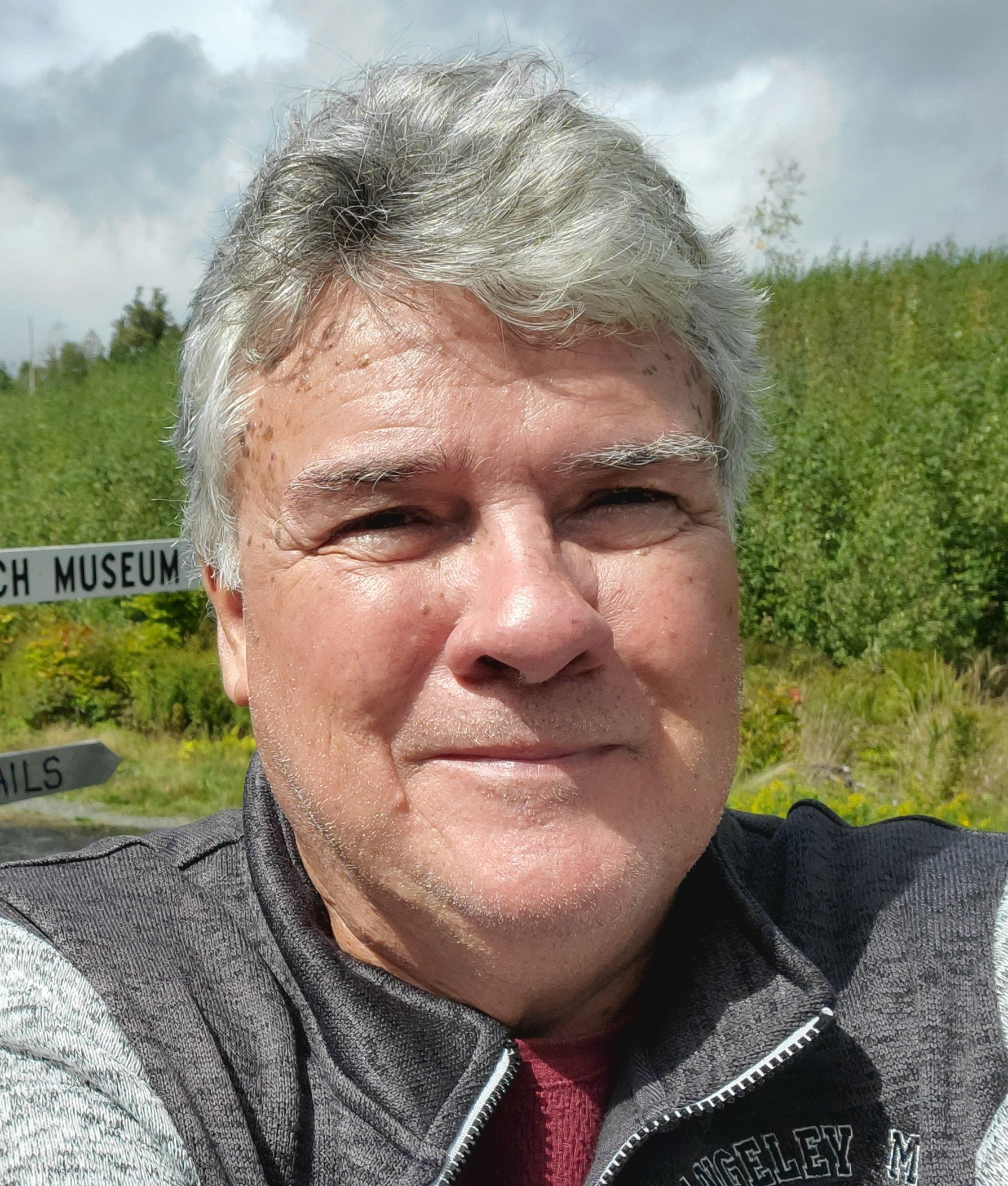 Raised on Cape Cod, Rob moved to Amherst, MA to attend college with a focus on music education and trumpet performance, but then changed his major to computer and electrical engineering. Not getting much personal reward from either program, he got into sound system design, which nicely meshed those two interests. Rob worked for WCRB radio for several years, then worked as an independent rep for lines such as Bose, JBL, Crown, Shure, and many others. He was a “value added” guy, often being called in to solve problems with major installs by dealers. He then moved into a more profitable area, running several offices for MUZAK, DMX, and other smaller organizations. After enough advancement, he became more of a marriage counselor for the employees in his offices of responsibility.

As time went on, Rob returned to design and sales engineering as a consultant. He finished out his system career as the designer for a small installer that specialized in larger accounts and houses of worship.

Before his retirement he started a wireless internet company (NHwisp which became RadiusNorth) to provide internet to areas of NH not reached by cable or DSL. It was rewarding to bring the service to schools, businesses, and homes, bringing them into the information age and allowing children to study and secure work in industries other than carpentry, forestry, and other traditional work in NH. He sold the business as service providers expanded in the area. 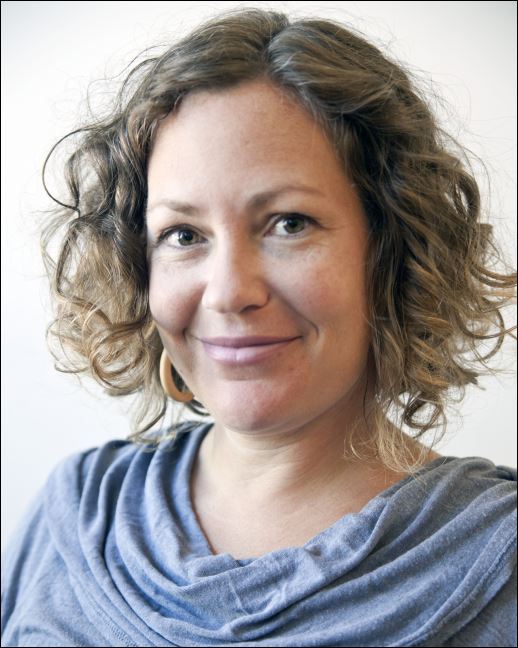 Mara Flynn joined the staff of the First Religious Society as Director of Children’s Ministry in 2019. She brings years of experience in theater, music, and education and is committed to fostering community, self-awareness and empathy, and the exploration of social justice as a spiritual practice. Mara holds a BFA from NYU’s Tisch School of the Arts. In addition to over 20 years teaching and directing workshops for various organizations (Tannery Arts Camp, Theater in the Open) she was co-director at Acting Out in Newburyport, MA where she taught improv-based theater and performance workshops for 15 years. As a singer-songwriter, Mara has released three solo albums on Burst and Bloom Records; her last album, “Good Hands,” was released in 2016. 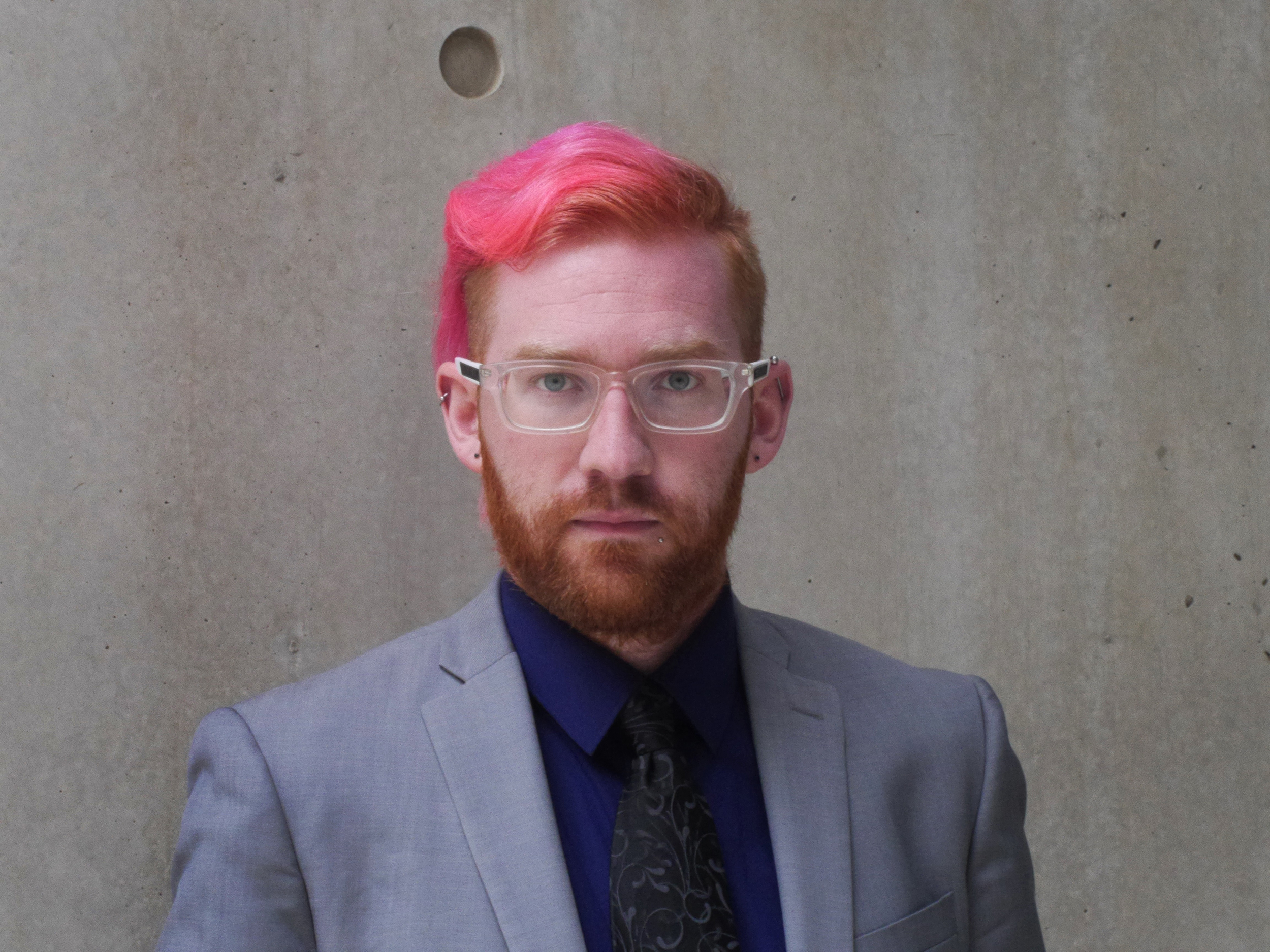 Justin Murphy-Mancini joined the staff of the First Religious Society as Director of Church Music in 2019. He joyfully oversees the church’s musical offerings, directs the Adult Choir, and performs on the organ, harpsichord, and piano.

Justin balances a commitment to building community through church music with an active performing and composing career. Over the past 15 years, he has served UU, UCC, and Episcopal congregations from Western Massachusetts to San Diego, wearing a variety of hats from choir director to vocal coach to concert impresario.

As a keyboardist, Justin has appeared in concert performing music from the High Middle Ages to world premieres of solo and ensemble music. He can be heard on recorded releases on the Acis, Marginal Frequency, and Another Timbre labels. Justin has written solo, chamber, choral, and orchestral music in a wide variety of idioms for both amateur and professional musicians. He is currently focused on developing long-term collaborative relationships with individual instrumentalists and singers across the US and Canada.

Justin grew up in Wilbraham, MA, where he began studying piano and organ from an early age. He earned a BM in Organ Performance and Composition, a BA in Philosophy, and a MM in Historical Keyboards from Oberlin College and Conservatory of Music, where he studied with Jack Mitchener, Marie-Louise Langlais, Webb Wiggins, Steven Plank, and many others. He completed his Ph.D. in Composition at UC San Diego under the advisement of Dr. Katharina Rosenberger.

Julie Parker Amery joined the staff of the First Religious Society as the Director of Religious Education in 2000 and moved into the position of Director of Faith Formation and Spiritual Exploration in 2019. In this capacity, she works in both youth (teenager) and adult ministries, ensuring a robust selection of faith formation offerings that include opportunities for spiritual growth, UU identity formation, social justice learning, and community connection. She has worked within the denomination in various capacities since the late 1980s and is also trained as a spiritual director, working both with individuals and with groups. Julie and her family live in Amesbury, where she covers lots of ground on walks with their dogs. She loves to cook, eat, jog, write, read, hike and sing along to musicals with her daughter.

Director of Congregational and Community Engagement

Cynthia Walsh, she/her, joined the staff of First Religious Society in 2020 as Director of Congregational and Community Outreach. Cynthia is a lifelong community organizer, specializing in social justice advocacy and program and leadership development. Cynthia holds a Master of Science in Dispute Resolution from the McCormack Graduate School of Policy Studies, Department of Conflict Resolution, Human Security and Global Governance at the University of Massachusetts Boston. Cynthia served as a Peace Corps volunteer in Guinea, West Africa and has traveled extensively throughout the Americas, Europe, and Africa. She is a self-described backyard farmer and loves to experiment in her kitchen lab! Cynthia and her partner live in West Newbury with their three sons, two dogs, and rabbit.